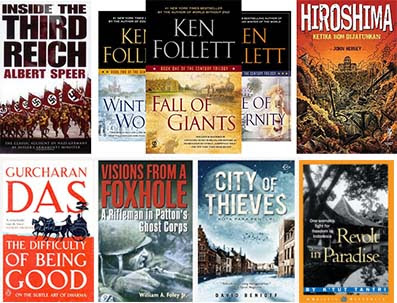 “It is forbidden to kill; therefore all murderers are punished unless they kill in large numbers and to the sound of trumpets.” ― Voltaire
From the sound of explosions, to the sight of blood running from the wounded, war has been able to leave deep scars for many generations. Cities and human life might be destroyed, but some ideologies remain alive. So, why do we fight in war? When will it stop? Should we hate the war or consider it necessary to protect our interests?
Based on the majority votes last month, on September 17 we are going to read and discuss some books that talked about wars from different perspectives. For that reason, we do not limit the books to be fiction or non fiction.
Expect to hear review on books like "Hiroshima" written by John Hershey, "The Difficulty of Being Good" written by Gurcharan Das, "Fall of Giants" - the first of Century Trilogy historical fiction novel written by Ken Follett, "Inside the Third Reich" written by Albert Speer, "Visions from a Foxhole: A Rifleman in Patton's Ghost Corps" written by William Foley, and "City of Thieves" - a black comedy novel which recounts fictional World War II adventures, written by David Benioff, "Revolt in Paradise" written by Muriel Stuart Walker a.k.a. K'tut Tantri, and more (to be updated).

RSVP should be made through this link: